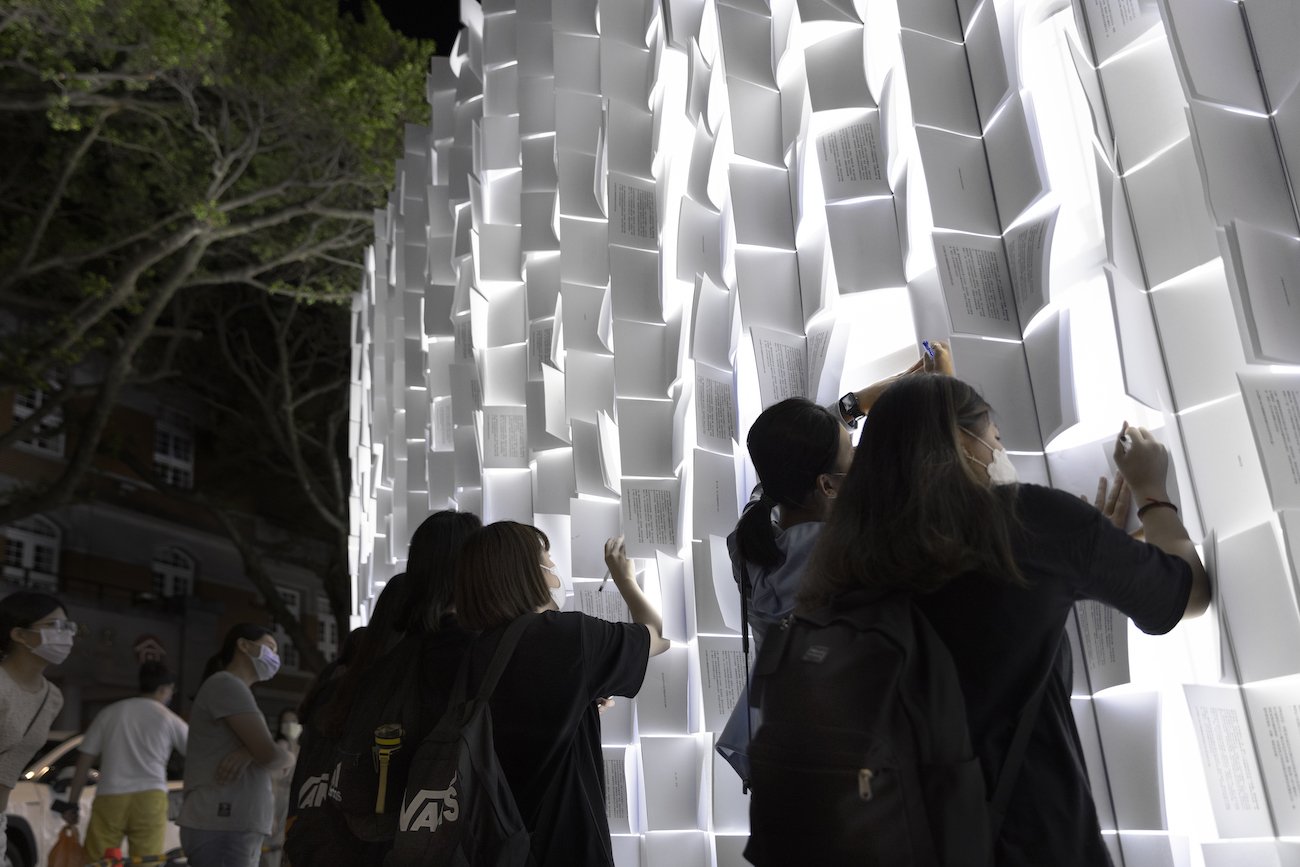 Luzinterruptus is an anonymous artistic group from Madrid, Spain that perform outdoor interventions through the use of light to highlight issues in the public realm. I’ve been following the group since they formed in 2008 and used to highlight their work in a design blog I ran back. I’m continually thrilled to see them still creating by the darkness of night to literally shed light on current issues or corners of the world that often otherwise go unnoticed.

Their latest piece, On Blank Pages, was installed last month in a roundabout within the city center of Taipei and features a curving wall of blank booklets. With the purpose of providing a vehicle for people’s freedom to express themselves through writing, the glowing wall calls to people, encouraging them to leave their unique words to share.

For those unfamiliar with the groups work, I wanted to dig back into a few older pieces I particularly loved. For a little context, I was a landscape architect for several years, with a love for urban spaces, cities and sustainability – working on projects like urban plazas, waterfront parks, green streets and roofs, and urban masterplans geared towards bringing artful greenspaces into cities. I was often consumed by integrated of bringing the wild back into the city, giving people a place of respite amongst the concrete and the quiet reflection of nature in a constantly buzzing scene. I got particularly interested in following the work of many guerrilla artists back then and plotting my own interventions – hoping people would see.

The group felt that the city was looking less and less green with the ripping out of trees to make way for improvements. They felt the city looked as though it was dying. It became more and more gray as large expanses of concrete grew within the public realm. Existing trees were removed and not replaced or transplanted upon construction completion.

To bring a little color back to the street, they staged an action they called “Injertos de Luz Verde” or “Green Light Grafts”. They chose a deciduous tree in which to hang plants and lights on a popular night for the youth of Madrid. These bright additions brought life to the street well into the morning.

The colored green bags reminded me of an exhibition at the 2008 Venice Biennale, an architecture exhibition in Venice title Out There: Beyond Building. Part of the exhibition had pavilions from various countries which held a common message important to the country and current projects. The German pavilion chose to focus on climate change, consumption and environmental destruction. Fifty stunted apple trees were showcased ripe with apples and drip-fed with colored green dye as if the trees are now only able to survive on artificial life support that keeps the green flowing.