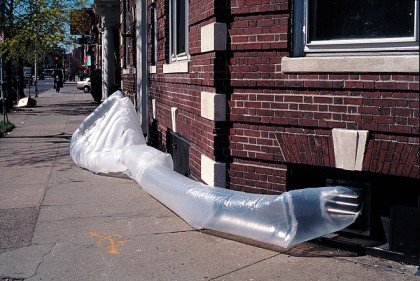 Chicago-based political artist Michael Rakowitz has been working on a project called paraSITE since 1998 that tackles the issue of homelessness that is an unfortunate reality of all urban areas. His inventive approach seeks to reuse warm air that leaves buildings through outtake vents for portable and personal temporary homeless shelters. He has built and disbursed over 30 different designs through different urban sites in New York City, Boston, Cambridge and Baltimore. All shelters were constructed using temporary materials that were readily available on the streets. The image above was constructed out of clear trash bags, ZipLoc bags and clear waterproof packing tape on a budget of $5.00.

The artist chose to name the project after the parasitic organism due to it’s place in the environment as something that exploits the energy of it’s host, like these temporary structures do by using the warm air that leaves a building from its heating, ventilation and HVAC systems for both inflation and heat.

The most interesting thing about this project is not just the general idea but the fact that it is not only site specific but person specific in that each shelter uses materials found on-site and are used to construct a shelter that responds to the specific needs and concerns of each individual like security, privacy, space and even laws.

The image below, which is from New York City, is especially interesting because it was specifically designed like a sleeping bag to get around the anti-tent law which states that any structure on city property that is 3 1/2 feet or taller would be considered an illegal encampment. The man was even confronted by police officers on several occasions but then left him alone after measuring the shelter and finding that it did indeed conform to the law.

Given that the situation of homelessness in our cities is on the rise, acts like this fuel the debate of what to do and what the future might be for our urban spaces as it relates to these people constantly seeking refuge amongst the buildings. From the project site,

“While these shelters were being used, they functioned not only as a temporary place of retreat, but also as a station of dissent and empowerment; many of the homeless users regarded their shelters as a protest device, and would even shout slogans like ‘We beat you Uncle Sam!’ The shelters communicated a refusal to surrender, and made more visible the unacceptable circumstances of homeless life within the city.”

“For the pedestrian, paraSITE functioned as an agitational device. The visibly parasitic relationship of these devices to the buildings, appropriating a readily available situation with readily available materials elicited immediate speculation as to the future of the city: would these things completely take over, given the enormous number of homeless in our society? Could we wake up one morning to find these encampments engulfing buildings like ivy?”

The artist doesn’t propose this as a solution for this very large and global problem but simply wishes to assist in furthering the discussion.

Its point of departure is to present a symbolic strategy of survival for homeless existence within the city, amplifying the problematic relationship between those who have homes and those who do not have homes.”